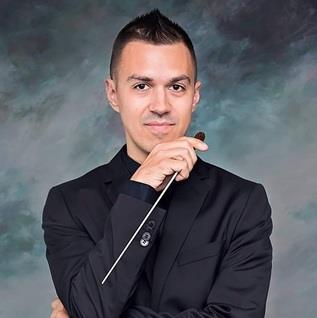 Michael Rais is an alumnus of Livonia Public Schools. He completed his bachelor's degree at Wayne State University in Music and Music Education in 2006 and attended on a full scholarship. After attending Wayne State University, he completed his master's degree in Music Education from VanderCook College of Music in Chicago. Mr. Rais has been teaching for Livonia Public Schools since 2007. Mr. Rais was nominated for teacher of the year during the 2013-2014 school year. In the spring of 2015, he is was named the Livonia Public Schools Middle School teacher of the year for the 2015-2016 school year.

Mr. Rais is very passionate about teaching music and continues to stay current on the latest teaching styles and techniques. He is very devoted to his students and strives for success for all his students. He has presented at the Michigan Music Conference and the national American String Teacher Association on his topic "Incorporating Rock and Roll in the Classical Setting." Rais won a grant through the L.P.S Foundation for his project "Skype; Side by Side Classroom." Through the grant, his classes were able to Skype with composers, music educators, and classrooms across the United States. Another award was won through Bright House Network to purchase Ipads for the school to utilize various music apps and smart music to enhance music student's learning in the school. Many musicians have worked with the Frost ensembles over the years such as Leonard Slatkin (DSO Conductor), Gary Ritter (Luthier), Kevin Wilt (Composer), David Petrie (Composer), William Himes (Composer), Wayne State University, University of Michigan, VanderCook College of Music, Adrian College, and many others.

Outside of the classroom, Mr. Rais is a very accomplished musician. He has performed all over North America as a touring bassist and musician. His primary instrument is the electric bass and double bass. He has been playing bass since 1989. Some of his bass mentors include Roger Rais (Saga), Denny Finney (Zooster), Al Martin (Billie Holiday), Derek Weller (EMU, Michigan Opera Theater), Max Janowsky (Detroit Symphony), and Stephen Molina (Detroit Symphony). He is the bassist for the South Eastern Michigan Wind Ensemble, co-founder/bassist of Il Segreto String Quartet, Metro-Detroit big band - Accidentally Hip, and session bassist. He has performed and toured with Motown's The Contours, Martha Reeves, The Coasters, The Volumes, The Platters, The Marvelettes, The Shades of Blue, Eddie Holman, Sonny Turner, The Legendary Teenagers, The Crest, Shirley Alston Reeves of the Shirelles, Slum Village, Black Milk, Sniff Test and many others. He won an award along with his ensemble Il Segreto String Quartet "Outstanding Small Ensemble" for 2014 and 2016 from the Detroit Music Awards. He is also an arranger. He has arranged music for The Motown Experience and many educational ensembles. He specializes in arranging pop music for string orchestra and full orchestra. His arrangements were performed by Flint Symphony, Northwestern Symphony, and others.  The School Band Orchestra magazine has also published Rais. He is also a performer endorsed and sponsored by GHS Strings and D'Addario Educators. You may visit his website at www.michaelrais.com

Outside the music and education world,  He has two children, Ani and Amelia. He is married to band director (Romulus HS) Jessie Mills-Rais. He is also an avid bowler, has an extensive watch collection, and enjoys coffee. He is also a hockey fan; his favorite team is the San Jose Sharks.